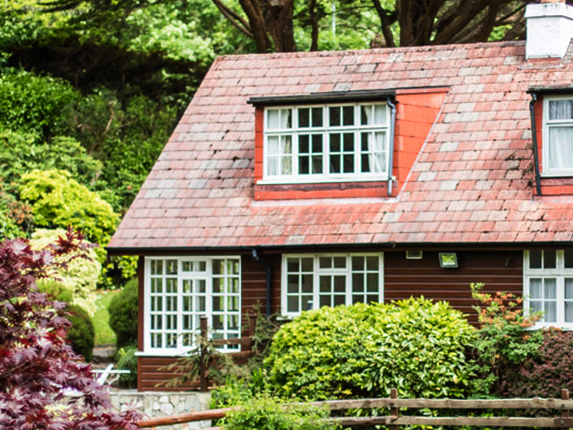 Westerly House is ideally situated for discovering the Wild Atlantic Way and such renowned places as the The Ring of Kerry. From scenic drives to relaxing days at the beach Westerly has all of this on its doorstep. There are activities galore in the vicinity for everyone in the family  from golf to Stand Up Paddle boarding or a chocolate workshop for the children. Guests can also choose to stay at the house and enjoy the magnificent gardens or maybe take out one of the three kayaks (life jackets supplied) followed by a relaxing soak in the hot tub before an outdoor barbecue or a drink on the pontoon admiring the sunset. The world is your oyster when you stay at Westerly House! 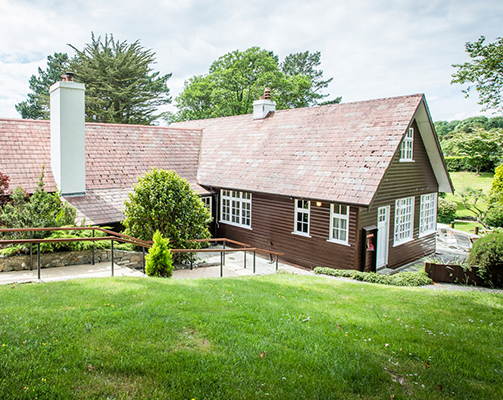 Nearby places to visit

The Blue Pool in Glengarriff (10 min drive): a popular swimming spot located in a nature park in the middle of the town next to the ferry to nearby Garinish Island. The park is family friendly with a play area, wooded walks and a viewing point to observe the many seals in this area. One swimming spot has a changing cubicle and stone steps which lead you into the water, further on another swimming spot has a pontoon to swim onto.

Garnish Island (10 min drive): a “tropical island” located in the harbour of Glengarriff in Bantry Bay, one of the Top 10 Gardens in Ireland. A short ferry ride from the Blue Pool.

Snave Pier (5 min drive): a very popular spot with local children for jumping from the pier into the bay on a fine day.

Snave Strand (5 min drive): a small strip of sandy beach at low tide with a picnic table, ideal for kids who want to build sand-castles, just after the bridge on the river Coomhola and directly opposite the turn off for Coomhola and Kilgarvan.

Whiddy Island (10 min drive + 25 min boat): a short ferry crossing from Bantry to this small island community. The only pub on the island, the Bankhouse, is situated near where the ferry arrives and offers great food. Bicycles are also available to hire on the island. There’s a swimming spot right next to the ferry and opposite the pub.

UP IN THE HILLS

Priests Leap (15 min drive): a drive along a narrow road to reach this panoramic beauty spot.

Kealkill Parkland Walks & Garriganasnass Castle (5 min drive): a 1.1km. loop walk, outdoor gym and fairy houses. The castle, built in 1541 is on the Northern bank of the Ouvane river.

Bantry House and Gardens (10 min drive): it was the first stately home to be opened to the public in Ireland , with scenic coastal location, magnificent Italian gardens and a collection of antiques from around the world, well worth a visit. Bantry House also hosts several festivals during the year.

Bantry Market (10 min drive): one of the most vibrant markets in West Cork, selling a vast array of local produce, bric a brac, craftwork and even pet stalls. The regular Friday market is even bigger on the first Friday of each month (the traditional Fair Day) when it’s not unusual to see donkeys tethered to lampposts and cages full of ducks and hens for sale. 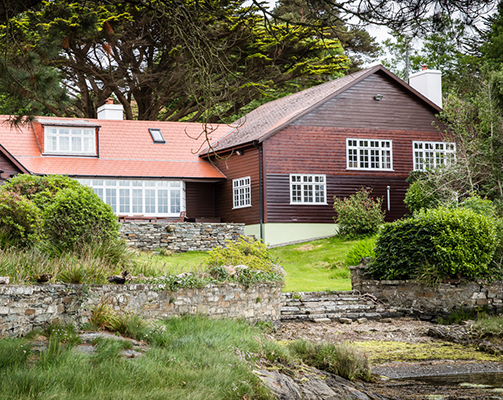 The Ewe Sculpture Garden and Gallery: Ireland’s only interactive sculpture Garden – in a magical riverside setting with bridges and waterfalls. The Ewe lies on the N71 road, 3 miles north of Glengarriff, on the mountain road to the trendy market town of Kenmare

Beara Peninsula or Ring of Beara:Take a day to drive around this amazingly beautiful and unspoilt peninsula, starting at Glengarriff and ending in Kenmare or vice versa. Discover colourful villages such as Allihies with its old copper mine, Ardgroom (exit for Healy Pass) with the tallest standing Ogham stone in Europe, Uragh, home of one of the most beautiful stone circles, the picturesque village of Eyeries and Castletownbere, home of McCarthy’s Bar, half grocery store, half pub.

Gleninchaquin Park: within the Ring of Beara, not only a working sheep farm with breathtaking scenery and accessible to all ages but also home to stone circles, standing stones, a ring-fort and various burial sites and other historical dwellings such as a famine cottage. Not to be missed, ideal for picnics and you can even bring a barbecue.

Dzogchen Beara: a Tibetan Buddhist Retreat centre on the road from Castletownbere to Allihies. High on cliffs overlooking the Atlantic with breathtaking views, it is open for casual visitors or those who wish to attend meditation retreats. The café serves homemade treats and lunches.

Dursey Island: reached by Ireland’s only cable car, situated at the tip of Beara for an alternative crossing and some fine hiking and bird watching.

Sheep’s Head: situated between Bantry Bay and Dunmanus Bay, very popular with walkers (see below).
The peninsula has three villages, Durrus (<15 km from Westerly), Ahakista (20 km), and Kilcrohane (30 km).
Durrus is well known because of the cheese of the same name produced here.
Ahakista is home to Graham Norton, the well-known TV presenter and the fabulous Ahakista Bar or Tin Pub (see below).
Kilcrohane is the last village on the peninsula where Ellen’s bar, is worth a visit, with great music sessions in the evening.
The Sheep’s Head Way is 88 km long and follows old tracks and roads around the peninsula with 20 looped walks. A Sheep’s Head Way cycle trail also exists beginning here in Ballylickey and continuing around the coastline of the peninsula, to end in Ballydehob. All walks are well indicated and cater to different levels.

Gougane Barra National Park: with a romantic lake, home of St Finbarr’s Oratory and source of the river Lee.
This was Ireland’s first National Park and covers an area of over 400 hectares (1,000 acres) with scenic walking trails of all levels, also very popular with painters and anglers.

Mizen Peninsula: Ireland’s most South-Westerly point. The peninsula is known for its rugged landscapes.
At the very end of the peninsula is the Visitor Centre and Signal Station reached by climbing down the famous 99 steps, and over the arched footbridge with the possibility of seeing seals or even minke, fin and humpback whales and dolphins.
This peninsula is also home to Barley Cove beach, a long sandy beach with sprawling dunes, a popular destination for families.
Stop off at Crookhaven, a lovely little village with 2 or 3 pubs, where you can go no further, a great spot for sitting on the pub wall (O’Sullivan’s) and enjoying the view while enjoying a pint or an ice-cream.
Ballyrisode sandy beach, near Schull, is full of charm, with small rocky islands all along.

The Healy Pass: 12 km of hairpin turns beginning at Adrigole Bridge in County Cork and ending at Lauragh Bridge in County Kerry. When you reach the highest vantage point of Healy Pass, stop to admire the view, you’ll probably wonder why this area isn’t more popular with tourists. With so many visitors flocking to the Dingle Way and the Ring of Kerry, the Beara Peninsula is often overlooked. Don’t make the same mistake!!

Kenmare: linking the Ring of Beara and the Ring of Kerry. Can be reached having crossed the Healy Pass or more directly on the N71 directly from Ballylickey. This is a town with great restaurants, lovely shops and a great vibe.

The Ring of Kerry: known all over the world. Along the dramatic scenery of this 175 km route are picturesque villages, historical landmarks, and sandy beaches. Sights not to be missed include the Gap of Dunloe, Kate Kearney’s Cottage, Rossbeigh (8km of golden sand), Derrynane, Moll’s Gap, Muckross House and Gardens in Killarney, Torc Waterfall, and the Skellig Experience from Portmagee (Skellig Michael is an UNESCO World heritage site and also recently featured in Star Wars, The Force Awakens and in The Last Jedi).

DRIVERS Please travel anti-clockwise round the Ring of Kerry via Killarney, Killorglin and Glenbeigh to minimise traffic problems on the narrower sections of road. Careful some sat nav systems have been directing traffic in a clockwise direction.

The Slea Head Drive: is a circular route, forming part of the Wild Atlantic Way, beginning and ending in Dingle “the most beautiful place on earth” according to the National Geographic. The Slea Head drive passes through towns and villages where Irish is still spoken and features the beach at Ventry, Coumenoole Strand, where some of the filming of Ryan’s Daughter took place, onto Dún Chaoin where you can board a passenger ferry to the Great Blasket island. 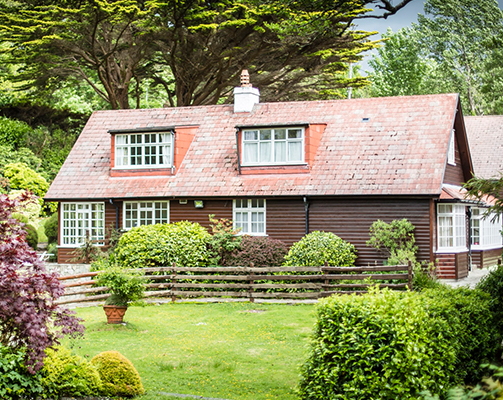 Seaweed Bath House: in Seaview House Hotel just opposite our house, you can have a seaweed bath, massage, body scrub, body wrap and foot and hand ritual. Tel 02750073
Bantry Bay Golf Club: only 5 minutes from the house. The 170 acre Bantry Bay Golf Club is a Christy O’Connor Junior and Eddie Hackett designed USGA standard course
Bere Haven Golf Club is a 9 hole golf-club, beside the sea, with 3 holes played across the water.
Glengarriff Golf Club’s nine holes are in one of the loveliest settings in Ireland.
Barley Cove Beach: for a day out with the family, a glorious sandy beach situated between two headlands on the Mizen Peninsula.
Sheeps Head walk: close to Bantry with various walking lengths and levels for all ages.
Maritime Hotel Leisure Centre: only a 10 minute drive for a swim when the weather is not so good. Open to non-residents
Westlodge Hotel Leisure Club: also open to non-residents and offers massage treatments as well as a fully equipped gym, a 9 hole pitch and putt course, a 16m pool for adults and a shallow pool and bubble pool for children.
Bantry Cinema
Lorge Chocolatier: 30 min from the house on the road the Kenmare, with an extensive variety of chocolates to suit every taste bud. They run workshops for children.
West Cork Garden Trail: sixteen lovely and varied gardens to visit from Enniskeane to Castletownbere.
Whale Watching: with West Cork Whale Watch from Reen Pier, near Union Hall. Trips are a minimum of 4 hours duration. Located less than 50 km from Westerly.
Atlantic Sea Kayaking: also from Reen Pier, see above. Full or half day Coastal Kayaking or starlight/ moonlight Kayaking, a unique kayak experience.
Sailing courses at Bantry Bay Sailing Club
Stand Up Paddleboarding (SUP): great for all the family with ages from 8 to 80
Horse Riding or Pony Trekking: with Bantry Pony Trekking, located 6km from Bantry in the scenic Mealagh Valley, tel 02751412, or with Bantry Bay Pony Trekking at Hollyhillin